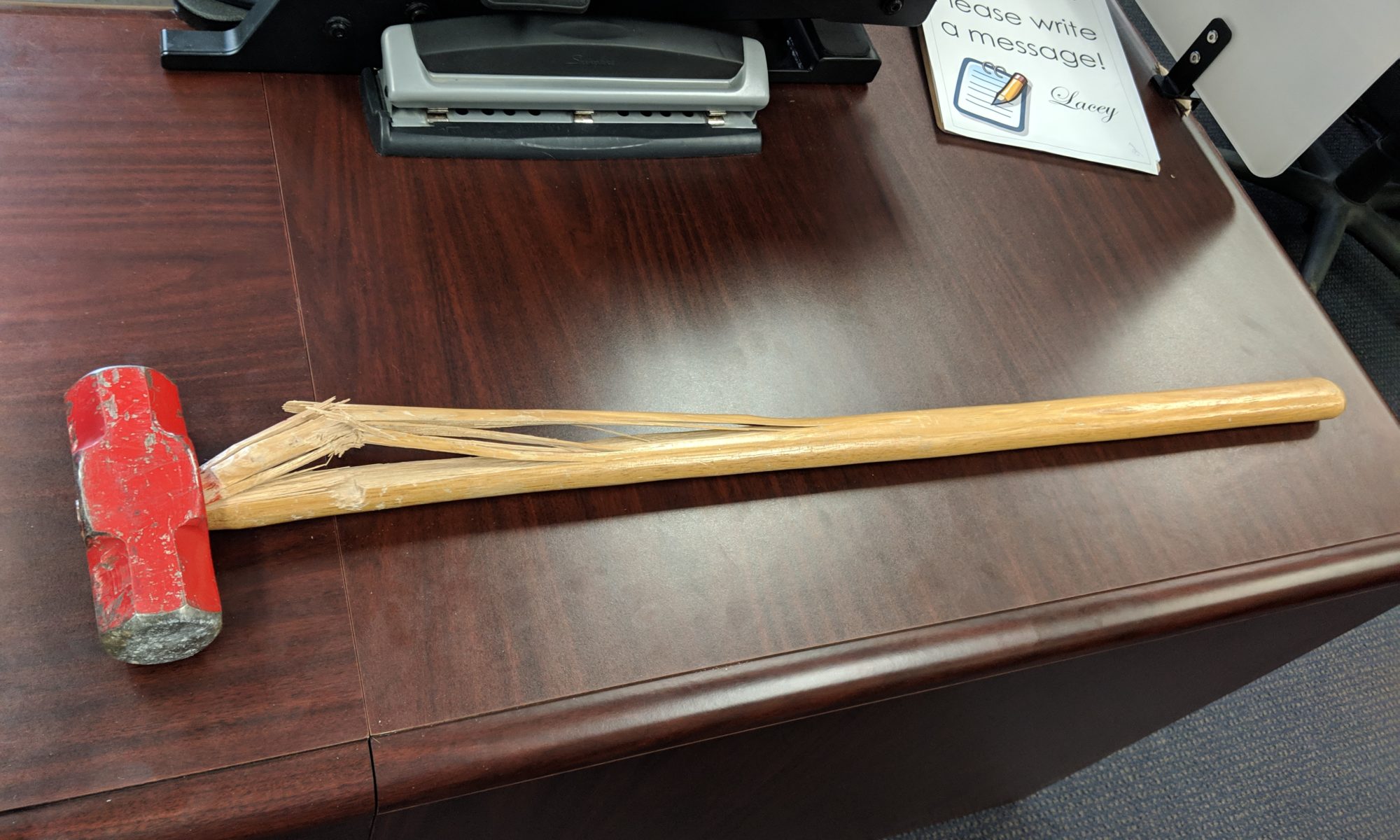 Any person with a minimum sufficient experience in life has been rewarded with failure. A subset of those people, with sufficient practice, will come to recognize failure, not as a friend, but as a teacher. A recent useful (and ultimately harmless) failure in my class became a key teaching moment, and may serve as a template to others to how to incorporate failure into teaching without disrupting the larger arc of a class

The “bed-of-nails” demonstration is a staple of my course. I’ll be the first to admit that compared to many of my colleagues I prefer a little extra “flare” in the presentation. The way I learned to do the demo (a useful way to discuss intersections of force, energy, and momentum) was as follows:

The physics of this – why the person on the bed of nails is ultimately safe, apart from getting pelted by flying debris – is (in part) as follows:

In previous semesters, the biggest “enemy” of this demonstration has been that the assistant underestimates the force required to make it through the top and middle layers of the cinder block. We’ve learned that falling purely under gravity, with our old hammer, was sufficient to get only through the top layer. This observation was turned into humorous commentary about the attitude of the cinder block in the “mockumentary” I made about the making of my introductory physics course:

We were surprised by a new failure mode. It’s not like I hadn’t anticipated this could happen – I just had no idea that it would when it did. One failure mode of this demo is for the hammer head to break off the hammer handle. I anticipated this. The trajectory of the hammer head, at speed, would take it over my head; if it hit my head, that is covered by the face shield. Best-case scenario was the hammer head becomes detached after impact and falls under gravity; again, here it would be about 8lbs hitting the face shield, which should take most of the blow.

Well, this failure mode finally happened – but not the way I had expected. We did two training runs of the demonstration on Monday night. Tuesday morning was the classroom demonstration. My teaching assistant (whom we had nicknamed “Thor” given his appearance with the hammer in our teaser posters from the beginning of the semester) swung at the block. He had a fairly clean hit, if off-center, and something broke – I heard something break. But it wasn’t the cinder block; instead, the hammer handle split down the long axis, rendering the hammer useless.

I exploded into laughter when I realized how the failure had occurred.

Later that night, I ran out and bought two new hammers, so that we have a primary and a backup for the future. That was lesson 1 of this failure.

The fact that this semester is “Marvel-themed” in my course, and the fact that I have referred to the old sledgehammer as “Mjolnir” (Thor’s first hammer in the comics and movies) since I started teaching the course, and the fact that my teaching assistant nicknamed “Thor” took a swing at the cinder block with Mjolnir and destroyed Mjolnir in the process, was too much to me like the plot of “Thor: Ragnarok”. The parallels were so hilariously stunning that I was inspired to make a “Previously on…” movie short for the start of the next class.

Using the new hammer, (of course, named “Stormbreaker”) we redid the demonstration on the next class day (Thursday, today). It went off without a hitch, as it should have the first time.

There are many lessons in this. The most obvious was “have two hammers.” The less obvious one has to do with materials. Materials will fail. This has to be factored into every decision you make on the engineering side of your life. Handles will break. Metal will crack. Adhesive will become less sticky. Nothing lasts forever. This is the nature of a world based on the laws of physics we already know, and is firmly reflected in nature. I was inspired by a talk given about a decade ago at a Texas American Physical Society meeting; a professor spoke about how he integrates failure into his introductory physics class by showing students how basic mechanics is enough preparation to think about the reasons why and how materials ultimately fail. This hammer failure is an excellent example of that.

Wood is most likely to crack along its grain. This is the direction of weakest cohesion in wood. Transverse to the grain, wood is sturdy; along the grain, wood is weak. The hammer handle split along the grain. This was predictable, even if the time of the failure was not. In addition, wood provides another lesson: in prime condition, even when it fails it won’t fail completely rip apart as long as it isn’t rotted or brittle. Though the handle split, it ultimately didn’t crack entirely apart. This kept the hammer head from flying through the air and saved me a collision with my face shield. Smart design of a material, assuming it can crack, can prevent the crack from becoming a catastrophe.

Failure teaches us many things. It’s important to listen.

Back into the swing