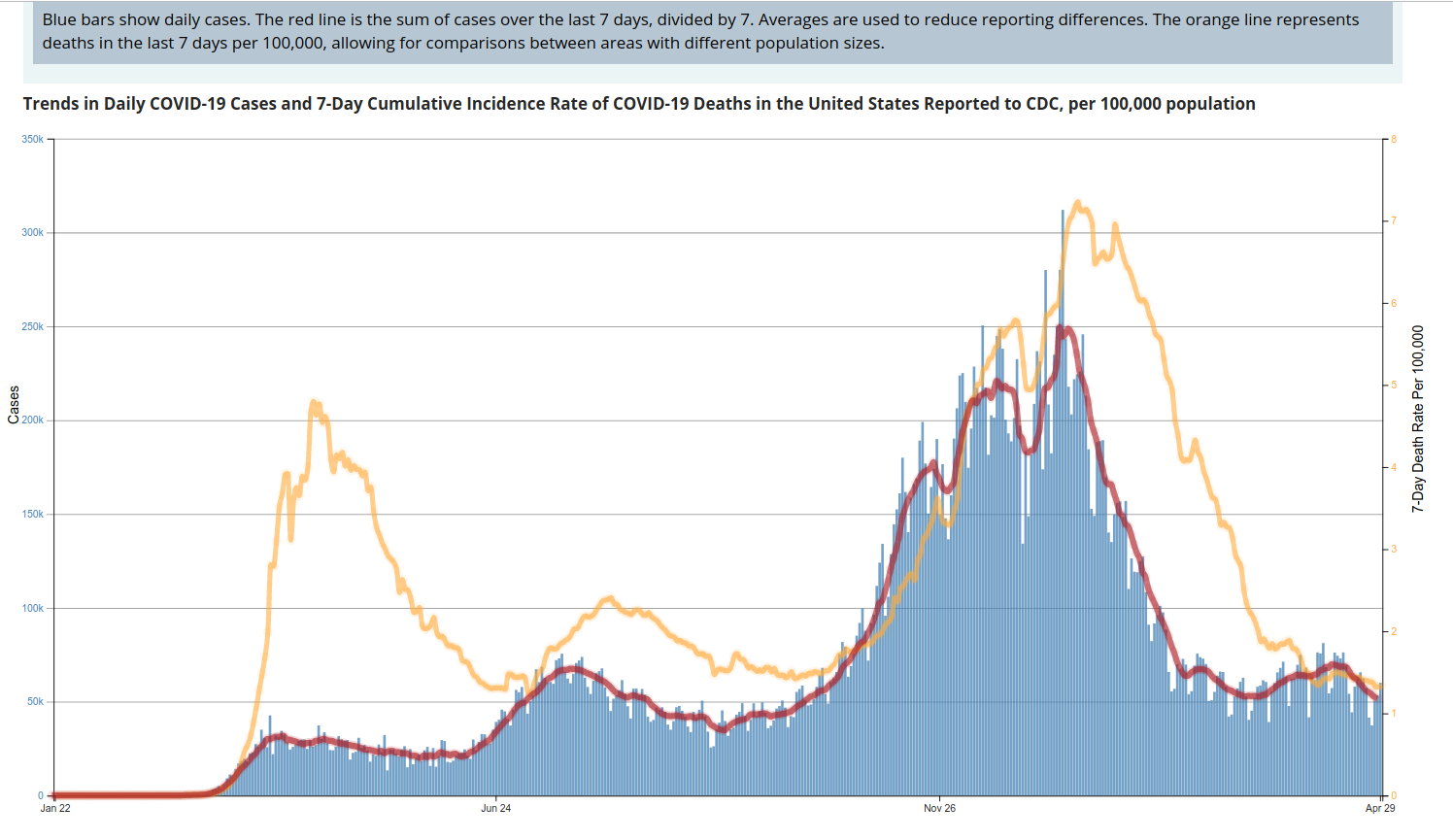 We are well over the one-year mark on the global COVID-19 pandemic. Progress is uneven. The U.S., for example, spent much of the last year at war with itself over basic scientific common sense. Instead of embracing cost-effective protocols like masking and social distancing, right-wing elements of the U.S. chose instead to paint measures as violations of constitutional freedoms (they are not) and invented an unnecessary culture war. While private companies, in some cases in partnership with public or academic institutions, raced to develop vaccines, societies fractured and only managed to provide aid and comfort to a deadly virus.

The U.S. is in a strange equilibrium. You can see it in the data. Mutant variants of the SARS-CoV-2 virus … some more deadly and far more transmissible than the original strains … are widely becoming the dominant infectious versions. Meanwhile, vaccines are beginning to prevent serious disease and death in the most vulnerable populations (the elderly, for example). Working against the vaccines, people are going around unmasked in closed spaces and with reduced social distancing while also expressing resistance to vaccination or vague “hesitancy.” These conflicting forces appear to result in a tension between the virus (its relentless drive to infect and replicate), driving up cases, and medicine, driving them down. We are in a weird stalemate.

Compared to a year ago, we really know how to fight this virus. There are at least 4 well-established vaccines against SARS-CoV-2, including more recent mutant strains. There are even more vaccines than just those 4 in wide circulation, but their efficiency is not as well-established. Nonetheless, a year ago there was not a single vaccine. We still lack medical treatments that definitely prevent death or reduce infections, apart from vaccines. A lot of therapies, like monoclonal antibodies or antiviral agents, have never been convincingly beneficial. Hospitals have a battery of interventions to help patients survive, including oxygen and the prone position during the worst stages of the disease. Social distancing and masking have proven to be the most effective strategies in the absence of a vaccine, but right-wing organizations created fake controversy about those approaches and led about a third of the population to rebel pointlessly against their use.

As India plunges deep into its worst medical crisis, no doubt now (like Brazil before it) a hot bed for viral mutation as SARS-CoV-2 spreads almost unchecked through society, we enter a terrifying new global phase of the pandemic. India, once poised to be a major producer of vaccines, now desperately needs to import therapies as it drowns under an unchecked case load. Meanwhile, in the U.S., the rate of new cases per day and even deaths rival the “second wave” that happened last summer. We’re nowhere near the peak in the bleak winter months, but we are still Pandemicland.

I myself was fortunate enough to receive a Pfizer vaccination through SMU. I was first able to sign up when vaccination was opened up to all adults. My first shot was about four weeks ago and my second about one week ago.

I was so happy to have a reaction to the second shot. About 14 hours after receiving it, I developed flu-like body aches. That was it. I took some acetaminophen every 8 hours, rested after my work day ended, and woke up the next morning feeling normal. My body had produced coronavirus spike protein and my immune system attacked. It was glorious. I am now part of a system of vaccinated people who help to block the spread of this deadly virus. Together, we protect each other and especially those who cannot get the vaccine or who, even when vaccinated, are still at high-risk.

I am just one of about 40% of people in my county (Collin County, TX) who have been fully vaccinated. I’ll reach full efficacy in about 1 more week. “Herd immunity,” when enough people are resistant to the virus sufficient to break the chain of transmission, is still very far away. We have no prior experience with this particular virus, but estimates would suggest herd immunity in a local population will be achieved when 80% of that population is vaccinated. Collin County is only half-way to that point, almost 5 months after vaccination began in earnest in the U.S. Other parts of the U.S. are further ahead, some further behind (the South in general lags the pack). However, we cannot expect vaccination to accelerate. In fact, the evidence suggests that the U.S. now has more supply than demand as we hit the core of people who reject or hesitate to get the vaccine. This alone may keep us a Pandemicland for a very long time.

The vaccine is easy. You get it, you have about 1 day of flu-like symptoms if you have a robust response to the process, and then it’s done. You can now fight SARS-CoV-2. It’s just about the simplest thing you can do besides masking and social distancing. And if you want the country to stop being Pandemicland, you need to get the jab now. If you’re not vaccinated, then you’re just one more opportunity for the virus to infect, mutate, and spread. Don’t let yourself be used by the virus.

No time to quit

Testing vs. Recommendations: a Local Perspective