My “day off” in the mine has been anything but. Well, to be fair, I volunteered. I had planned to spend the day catching up on news, listening to some statistics lectures from SLAC [SLUOStats], and generally take photos of all the cool stuff down here in the Soudan Mine (and blog about it afterward). However, when somebody offers you the chance to suit up, step into a clean room antechamber, and polish gas hoses, you just can’t say “no”.

Well, I didn’t say “no”, so I found myself suiting up (booties, then walk into the clean room, then more booties, then the hat, then gloves, then the suit – don’t let the arms touch the floor – then a second pair of gloves). We cleaned off the work surfaces and then proceeded to unwind and clean a series of gas hoses needed inside the detector (which is an even higher-level clean room, through the big door). This was careful work. Three of us did it, the first (me) cleaning the big gunk off, the second (Xinjie) scrubbing the intermediate gunk, and the third (Jodi) doing to final wipe-down. The hose had to be carefully coiled to avoid kinks and then stacked on a clean surface. It took about 15 minutes per hose, four hoses.

Hey, this was only supposed to be a vacation from BaBar.

Later, after lunch and some lecture-listening, I wandered into the MINOS cave next door and started snapping pictures of all the great detector stuff they have in there (not to mention the artwork). Jodi took me down the to back end of the detector to see a smaller experiment that is studying low-rate backgrounds, useful for experiments like CDMS. It occurred to be, as I stood in front of the MINOS far detector, that my body was subject to the NUMI neutrino beam. This intense beam of neutrinos starts at the main injector at Fermilab, passes through the near MINOS detector and travels under Wisconsin right into the MINOS cave. The beam is thousands of feet wide when it reaches Soudan, and its center passes right through the MINOS far detector.

It was humbling to stand there, knowing that quite a few more than the normal number of neutrinos were passing (still harmlessly) through my body. I could not feel the tickle of the weak force any more than the Earth notices the errant sting of a mosquito, yet MINOS sees them. With its dense, multi-story metal plates interwoven with scintillating material, the MINOS detector provides a much more acceptable target for the neutrino. As was presented at ICHEP 06, their measurement of the mass difference between the second and third neutrino mass eigenstates rivals that of Super Kamiokande, and with more neutrinos collected every day will soon surpass Super-K in precision. Other parameters require more data to rival Super-K, but they’ll get there.

Near the entrance to the MINOS cave sits the public lecture area for the CDMS experiment. The science tours of the mine use this, and a corresponding MINOS area, to explain the science to audiences. In a small case on the demo bench was a typical CDMS detector, one of many that enter into the “towers” inside the full experiment. I couldn’t help reflecting on the detectors, and catching the moment with my camera phone.

The future of U.S. high-energy physics is uncertain, and as a consequence I have had a lot on my mind of late. […] 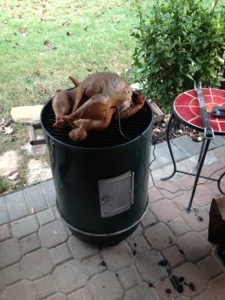 We catch a glimpse of the turkey.

Thanks to my dad for reminding me about “Talk of the Nation: Science Friday”. I usually miss the program because of work, […] 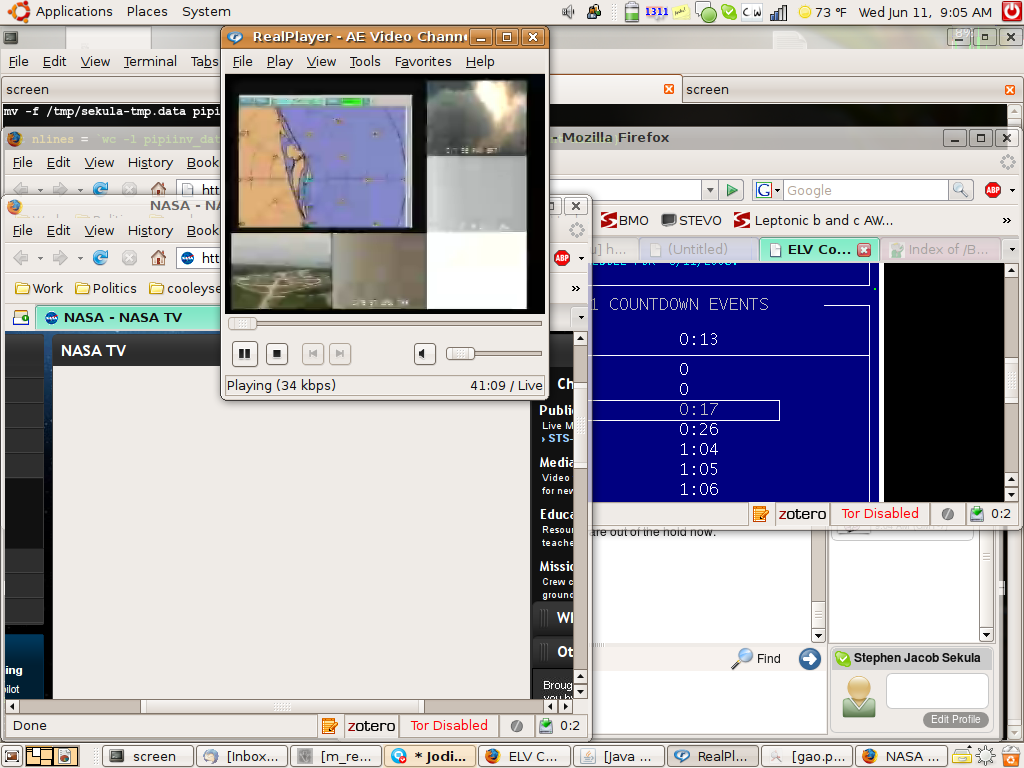 This was a pretty exciting week. It peaked on Wednesday when the GLAST satellite, a space-based gamma ray observatory, was launched into […]