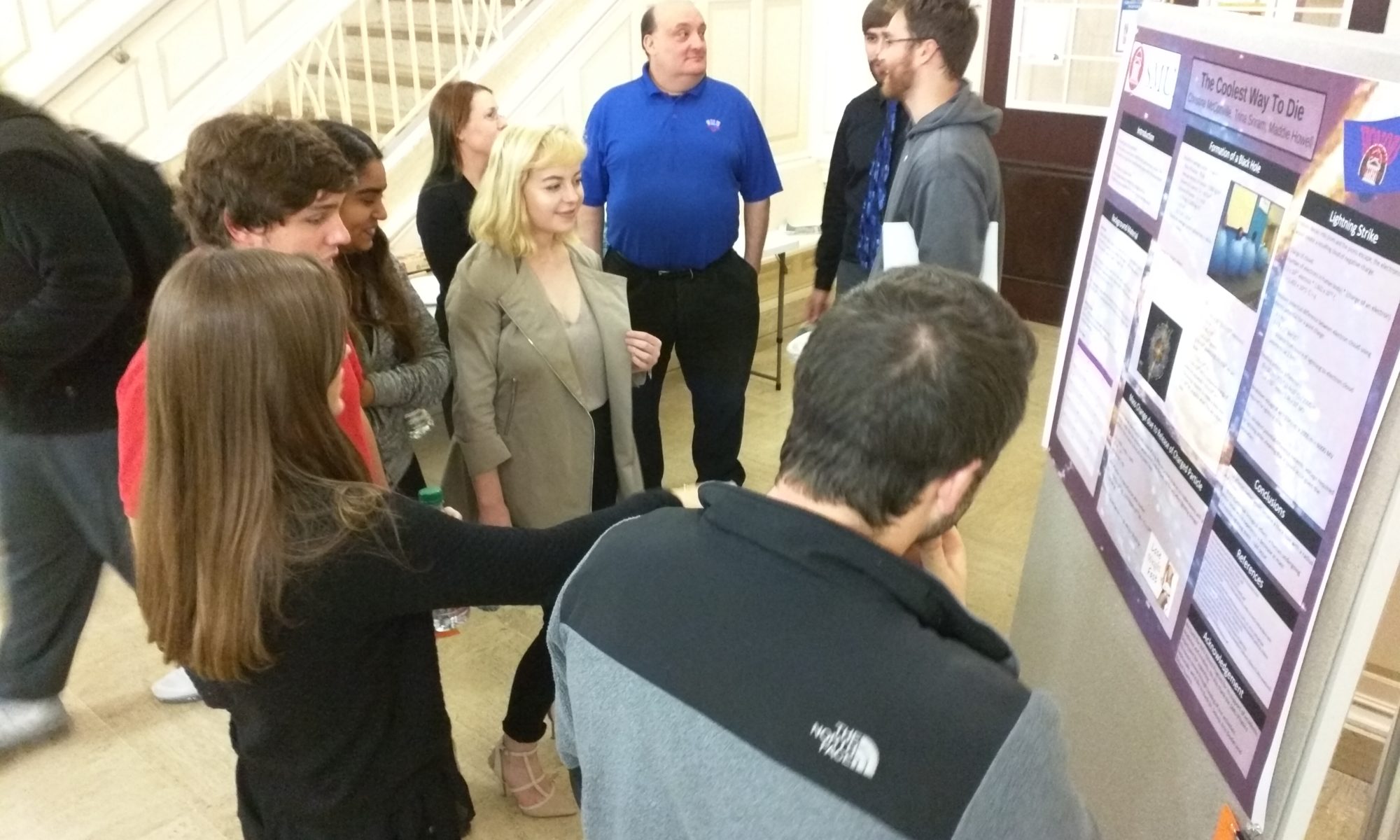 When I arrived at SMU in 2009, I was not a teacher. I was a researcher. Unfortunately, it has been common in our field to leave people unprepared for the teaching environment. When I was in graduate school, there either were no classes in, or no one advised me to take classes in, how to teach physics. While it is somewhat regular now that universities offer graduate students (or, in some cases, require) a course in teaching physics, it’s less common than it needs to be.

So how did I learn to teach? Well, there was the standard “here are my notes, teach off of these,” offerings of colleagues. That didn’t work. First, there is deciphering someone else’s notes. Then there is deciding whether or not this is how you want to present the subject. You wind up teaching yourself anyway. What I came to learn was that there is no lack of material to teach … but there is a fantastic dearth of material for faculty on how to be a teacher. Those are two very different things.

All physicists beyond a Bachelors Degree know what to teach: introductory mechanics, relativity, electricity and magnetism, advanced mechanics, quantum mechanics, and statistical physics. That’s the core, handed down since it was effectively developed in the 1800s and early 1900s. Then there are the specializations: atomic physics, solid state physics, plasma physics, particle physics, astrophysics, etc. We all know what to teach.

But how did our professors prepare for class? How much in advance did they set up written or demonstration material? Did they have help? Did they practice before coming to class? How did they unwind after class? (I am usually pretty worked up after class period) How did they take on a new class, one they’d never taught before? How did they decide on course structure? What systems worked behind the scenes to enforce that structure? (a spreadsheet, a notebook, something else?) How much of a course is dictated to them (e.g. by curriculum) and where do they have a free hand?

When I started teaching at SMU, I began as I had been taught: chalkboard lecture. I hated it. It wasn’t that I couldn’t do it. I just hated the fact that I had to focus hard on board layout, on controlling the size of my handwriting, on controlling the quality of my handwriting. I remembered the things that frustrated me as a student: a professor’s notation deviating from the book in some subtle way (e.g. the way they draw a Greek letter), or when material starts on a board and continues, not on the next one, but a far-removed section of the board. I made those mistakes, too. I hated it.

After my third-year review, I vowed to overhaul my teaching. Inspired by some of my local colleagues who preached the gospel of data-driven physics education research, I flipped my classroom. Instead of lecturing at the students for 50 or 80 minutes in-class, I used class time to work with the students. Lectures moved online. Reading and lecture video had to be watched before coming to class. This was checked with a brief quiz. Class was spent learning to grapple with concepts and apply them to solve problems.

I’ve written about that before. What I’ve written less about is the concept of the Grand Challenge Problem that became a living part of my classes. I’ve deployed it with increasing frequency since I started using them in about every one of my classes. I have never been disappointed.

A culminating event of this semester will be the completion of a Grand Challenge problem. This is a physics problem with no textbook solution. Rather, you will draw upon your own creativity, informed by the principles of physics you learned in PHYS 1307 and are learning in PHYS 1308, to address the question in as detailed a manner as possible … This is not purely a storytelling exercise; rather, you will engage in a mathematical and physical exercise where the math speaks, and you will describe what it says.

The Grand Challenge Problem evolved out of something that our new college dean, Thomas DiPiero, said during an early faculty meeting in the fall of 2014. He had just joined SMU in June of that year, and challenged the faculty to educate students in new ways. He encouraged the use of “Grand Challenge Problems” – problems with a significant and large-scale theme that drives people toward a big goal, but by encouraging them to move along threads of specific interest to them. For example, a grand challenge problem in modern physics might be to detect the constituents of dark matter. This is the umbrella problem, but with no simple or textbook recipe for solving it. Rather, people have to pursue, most often in teams, attempted solutions to the problem: axion detectors, particle detectors, new theoretical frameworks, etc. One or more of these might succeed – or all might fail. That is the beauty of the grand challenge problem: there is no predefined answer.

My first problem for my students that year was as follows:

A patient, bored before their MRI exam, rubs their feet aggressively on the shag carpet of the waiting room. Also a bit nervous, they unconsciously scratch at the small, dark blue, circular tattoo on their left arm. Soon after, they are placed in an MRI machine. Describe at least three interesting things that could happen to this patient when the MRI machine is turned on.

When I took over as the instructor for our new Honors Physics Class, a teaching assistant (Eric Godat) and I worked the Grand Challenge Problem into that class as well. We had already done a demonstrations of such a problem for the PHYS 1308 class, including a paper on a challenge we gave ourselves (“All the electrons in the Solar System are suddenly moved into the Sun; describe three things that happen next.”). I have not deployed the Grand Challenge problem in my introductory mechanics class, only because I am not sure how to handle grading papers or presentations from over a dozen teams. For Honors Physics or PHYS 1308, there were a manageable number of teams (not more than 10 teams of about 3 students each).

Which brings me to my first semester of my second decade: Fall 2019. For the first time since my first year at SMU, I got to teach the third-semester physics class. As an aside, I have been trapped by my department in teaching introductory physics classes for most of this decade, despite having asked to teach upper-level or graduate classes. To rebel, I teach the curriculum but the way I see fit. My goal is to make physicists out of these students, not just “teach physics.” I follow the best-practices of the field in doing so, of course, but I am intent on recreating in miniature the research environment inside the classroom. That isn’t quite the teaching philosophy inside my department, but with more young people in our department now than a few years ago there is clearly a shift afoot.

Since I last taught third-semester, or “Modern,” physics in Spring 2010, I had to radically alter the course compared to how I taught it a decade ago. First of all, it was time to flip the classroom. I generated a playlist of modern physics lecture videos . It’s not technically complete, and some videos need edits after mistakes in the first round, but it’s a good foundation. In concert with that, I reflected on what students really needed to learn in this class to be ready for the next steps.

The next steps are mathematical methods and advanced mechanics. So it will be some time before they see the Schroedinger Wave Equation again, although relativity will likely (depending on who’s teaching the class) be reinforced again in advanced mechanics. It was clear I needed to emphasize a few key things:

That’s it. All the rest is exercise and application. If one groks these basics, one is prepared for deeper study of all of them in future mechanics, electromagnetism, and quantum mechanics classes; as well as in elective applications of this in specializations like atomic or plasma physics. I looked to other universities to see how far they typically go in a 1-semester modern physics class. For classes like ours at SMU, using the same book as we do (Harris, 2nd edition), those classes are broken into 2 semesters: the first semester completes chapters 1-6 of Harris (special relativity, photoelectric effect and blackbody radiation, wave nature of matter, and the Schroedinger Wave Equation with 1-dimensional applications). They save all the specializations (hydrogen atom, atomic physics, solid state physics, nuclear, and particle physics) for the second semester, which we do not offer.

I am a big “less is more” fan when it comes to teaching physics, and with my key foundations in mind I aimed to cover Harris chapters 1-6 plus inserted material on thermodynamics. This worked well, and allowed me to spend a full month on relativity and a full month on solving the Schroedinger Wave Equation. It was glorious. When you do that, there is no need to rush to cover all those later chapters: they naturally work themselves into the fold of problem solving in 1-dimension. I showed the students how to model the nucleus with an nearly infinite square well married to the Coulomb potential, and how to build a 1-D “solid” out of just 10 atoms, where all the basic properties (e.g. electron energy bands and band gaps) emerge naturally and readily. I did nuclear and solid state physics without naming it – it just felt natural, as part of solving the wave equation.

I also employed the Grand Challenge Problem in this venue for the first time, as a means to enforce synthesis learning and to allow students to explore those later specializations on their own. There is no need for me to cover them in class if the students are motivated to explore them on their own. I intentionally kept the question vague:

Students were arranged into teams, four in total. Two teams elected to explore stars and their deaths (after all, you cannot pick apart a star and see what is going on inside – you need physics to help do that dissection), one team looked at the aftermath of Chernobyl (inspired by the recent TV series), and the last team looked at harnessing lightning strikes as a mean to obtain stored electric energy (seeing what’s going on inside a storm, or a lightning bolt, or a capacitor designed to store a lightning bolt). I couldn’t have invented those assignments – the students self-directed toward interesting scenarios and then ran with them. In the process:

I am excited for what lengths students went to in order to address scenarios of their own choosing, all motivated by a vague problem statement. This is more akin to real research, where the problems are ill-stated (thanks, Nature) and the answers are never guaranteed. In fact, failure is often the most important lesson to communicate: the failure to predict the burn-time of Helium in a dying star led to a discovery for that student, in a more dramatic way than reading it in a book ever could convey. That is what I want from my classes: a foundation of physics seamlessly linked to a structure for personal discovery.

After all, isn’t that what we spend our whole lives in physics actually doing?

An education experiment (for me): flipping the classroom

Anti-Steve: the end of the semester

“The Flame” Challenge – Do Better at Science Communication