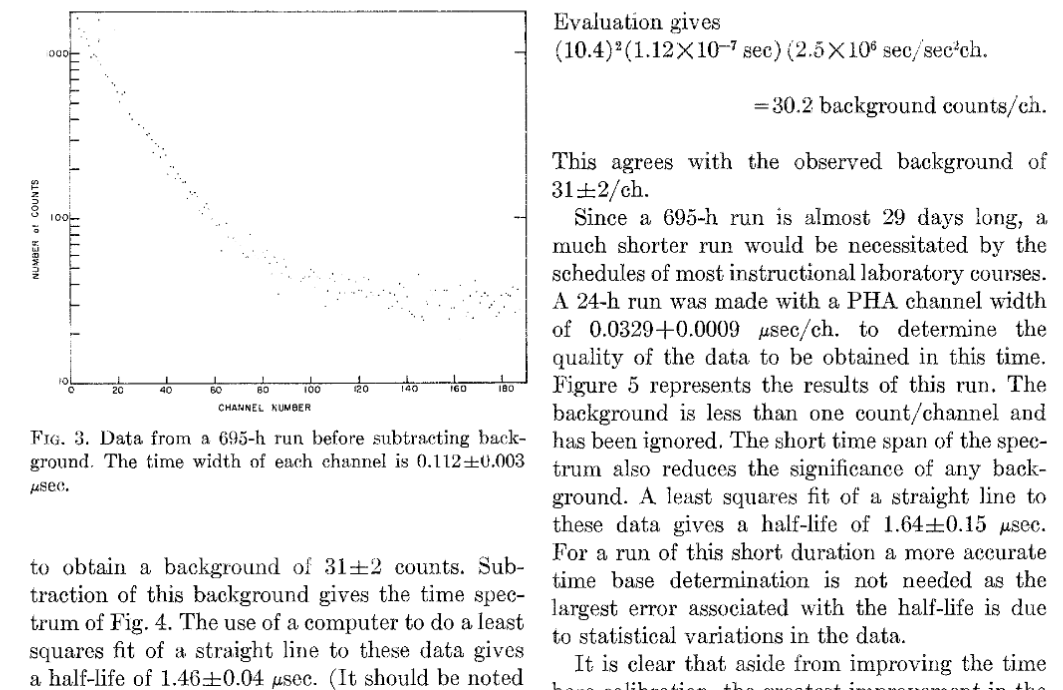 In 1970, Hall, Lind, and Ristenen (Univ. of Colorado at Boulder) published a paper in the American Journal of Physics (AJP, vol. 38, No. 10) on “A Simplified Muon Lifetime Experiment for the Instructional Laboratory.” Basically, it articulates precisely the experiment at the heart of a similar instrument at SMU. Muons are produced in cosmic rays raining down on the atmosphere. Some muons make it all the way to sea level. Some of those are moving slowly enough to be stopped when passing through material. If that material gives off light in response to the slowing, stopping, and then decay of the muon, it is possible to use the light to measurement the lifetime of the muon.

Hall et al. reported on a run of their experiment of 695 hours (about 29 days!). I’ve had nothing but time on my hands, and after discovering the Hall paper when I started playing around with the SMU instrument I was inspired to repeat their experiment.

As of today, I have 695 hours of data from the muon detector at SMU. Based on a model fitted to the data (an exponential decay function added to a flat background), I find the lifetime of the muon to be

nanoseconds (ns). The accepted lifetime is

ns. The Hall et. al result using a similar but earlier version of the experiment found

. (note: they quote the half-life, but that is easily converted to the lifetime [average life of the muon] by dividing the half-life by ln(2)).

In 1970, as now, the lifetime of the muon has not changed within the resolution of two 695h data sets, taken independently and 50 years apart. There is a wonder in the power of scientific investigation to reveal those things that are steady and constant in the cosmos.

The Joy of the Muon

What I learned this week

The Higgs Boson and the Bottom Quark