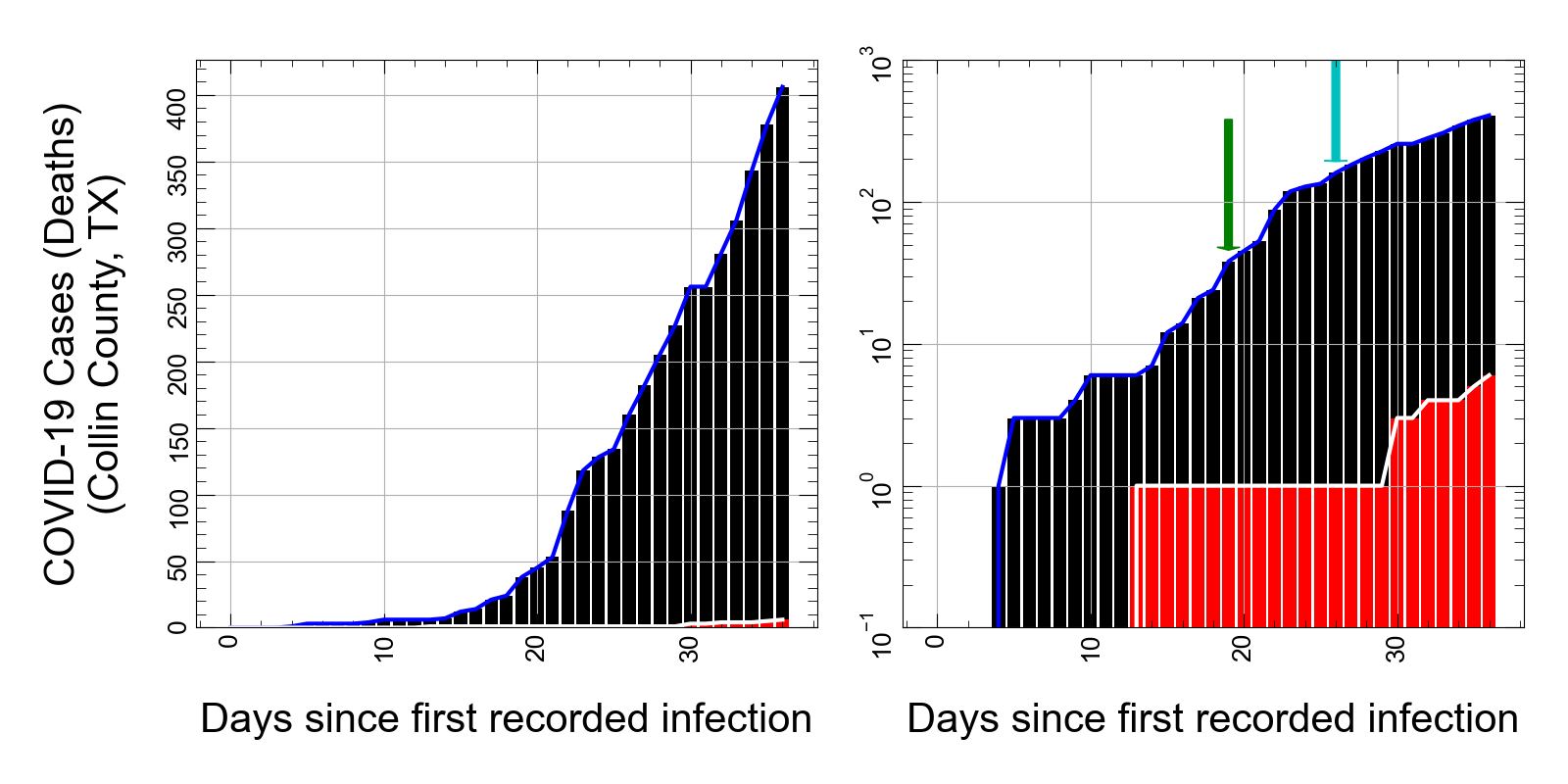 One of my daily activities in the last 20 days (or so) has been to scoop up the COVID-19 case and death data for my county from the Texas Department of Health’s (DSHS) information center [1]. I’m not an epidemiologist; I’m a physicist. I’m not trying to make predictions; I’m making observations, assuming the data from DSHS is accurate (given under-testing and under-reporting, it’s most likely a suppressed count on both cases and deaths, but I can’t correct for that).

Collin County began social distancing on March 24, 2020. At the time, we were in the middle of what would become the first major phase of exponential growth of COVID-19 cases in our County. The first case was reported to DSHS 37 days ago; by March 24 (19 days after the first case), our county had about 35 cases. At that time, the doubling time for cases was about 2 days. If we had remained on that climb, which presumably represents a doubling-time scenario before social controls over spread, then…

You get the idea. By today, 38 days after the first reported case, if you run the math we would have had almost 9700 cases. Let that sink in. If the trend that emerged between about March 19 and March 27 (inclusive) had persisted, we would be approaching something in the neighborhood of 10,000 cases alone in Collin County right now.

(Of course, the exact numbers should not be taken strictly literally; there is statistical error on each count, and in addition to that there is an unknown systematic error from under-recording of cases – likely, the above are underestimates, and so can be considered a best-case situation.)

The rapid increase in cases is the direct result of how unchecked diseases spread: exponential growth. However, about one week after social distancing measures went into effect in the county, the doubling rate slowed. Instead of doubling every 2 days, we entered a period (where we still are now) where the doubling rate changed to 7.5 days. It lengthened (a good thing!) by just over a factor of 3. That change in slope began around March 28.

What this meant was that as of April 10, instead of the almost 9700 cases we might have had on the old doubling trend (when we were doing no appreciable social distancing), we instead have reached only 400 cases using limited social distances (businesses were finally not all deemed “essential” on March 31, and we should be expect to see the effects of that in the next weeks).

We humans are both the soldiers and the battlefield. Each of us is the weapon and the target. Right now, the best medical tactic is to hunker down in our trenches, spread out, and try not to be easy pickings for the respiratory bombs deployed by the Coronavirus.

But we need an offensive plan. We need a coordinated strategy. We need a team of generals to fight a war on multiple fronts: developing tactical weapons against the enemy (vaccines, anti-viral drugs), developing new defensive strategies (deployments of medical equipment), and developing strategic campaigns to cut the enemy off from its supply of resources (e.g. rapid testing, contact tracing, and targeted quarantine).

But we have no leaders. Not really. So for now, we soldiers must run the fight. For us, that means we hunker down in our trenches, isolated and in modest safety. It is a safety threatened if we are suddenly ordered by the loud lunatics to “charge!” without weapons, without armor, without a strategy.

Keep distancing and carry on.

Sunday in the Park with Pandemic

Dealing with Misinformation about COVID-19