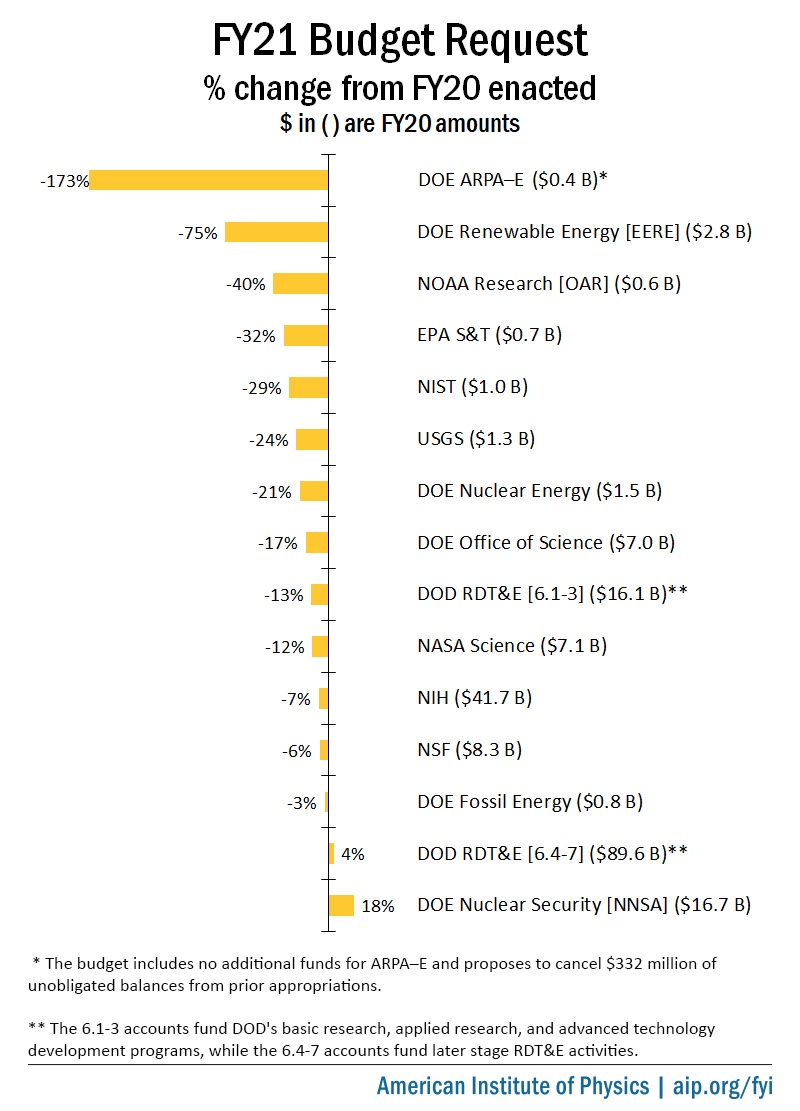 As expected, and nicely summarized by the American Institute of Physics:

President Trump’s latest budget request largely repeats past proposals to sharply reduce funding for non-defense R&D programs across the federal government. However, it includes a stronger emphasis on research tied to the administration’s “Industries of the Future” focus areas, especially artificial intelligence and quantum information science.
— Read on www.aip.org/fyi/2020/trump-seeks-familiar-science-cuts-favors-‘future’-industries

The Washington Post article below [1] is a nice summary of what is currently digested from the executive branch’s FY2021 federal budget proposal. That dropped yesterday. Specifically regarding agencies that fund basic, curiosity-driven science, these excerpts are indicative of the pattern of proposed effects:

The Energy Department would get a boost in funding for safeguarding the nuclear weapons stockpile, a core mission, but outside that program would see a 28.7 percent cut, including more than 1 billion cut from its $7 billion science program.

Zeroed out in the Trump budget is funding for a new space telescope, the Wide Field Infrared Survey Telescope, which is entering its construction phase. WFIRST would scrutinize planets orbiting distant stars and study the distribution of galaxies in an attempt to better understand the evolution of the universe. It remains a priority of the astronomy community and has survived two previous attempts by the administration to kill its funding.

Under the request, the National Science Foundation’s budget would shrink from $8.3 billion in 2020 to $7.7 billion in 2021, a cut of about 7 percent. The NSF funds basic research through grants to a wide variety of scientists and plays a major role in funneling money to programs that might not normally receive investment from the private sector. The Trump budget reduction would return NSF’s budget to close to the level it was in 2017.

The proposal is likely dead on arrival, as have been past proposals from this president. It matters now what Congress decides to actually do to allocate the budget, especially since the president’s budget does not attempt to reign in the federal spending deficit in event the next decade. 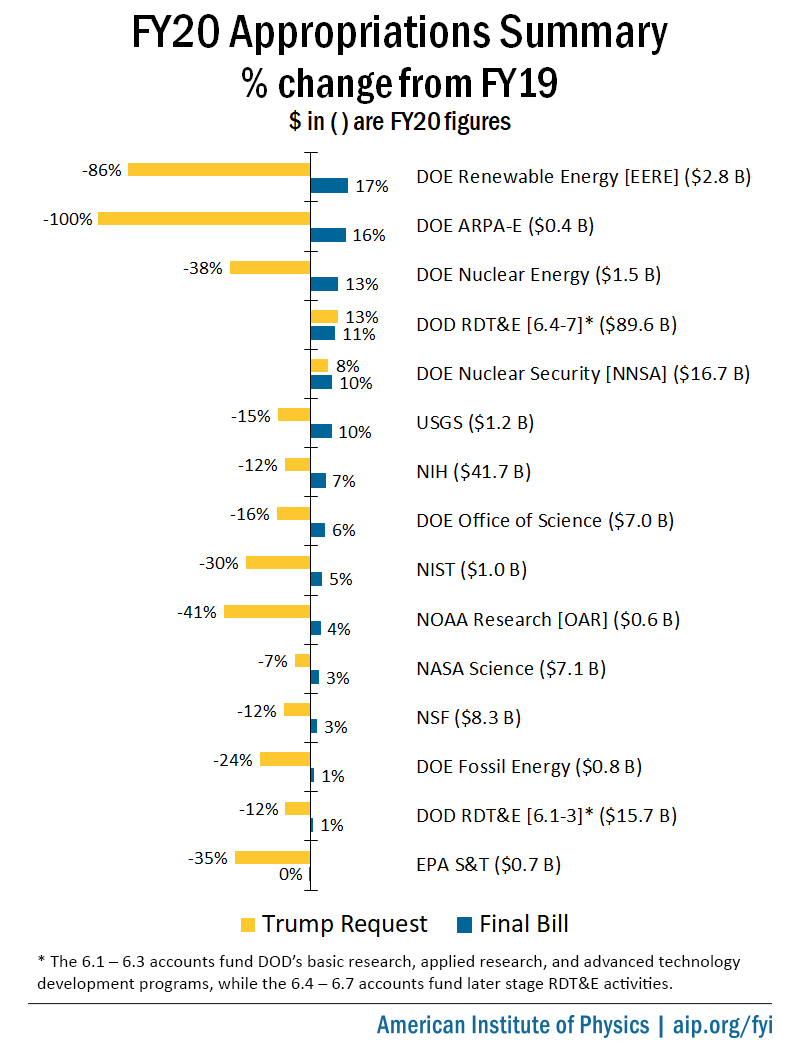 For almost four years, the executive branch of the United States government has been advocating steadily for a decline of science funding for the nation. In spite of this, the U.S. Congress has acted as a firewall against these requests, effectively making every budget request for cuts to scientific investment dead-on-arrival (with some notable exceptions, of course, in environmental science, where the executive branch has done serious damage aided by the Congress). In this post, I’ll focus on the U.S. Department of Energy’s Office of Science, NASA Science, and the National Science Foundation, as these are the primary funders of non-applied, curiosity-driven science in the U.S. I realize I am leaving the National Institutes of Health (NIH) off of this (among others – see above); NIH’s scientific investment is geared toward actively improving human health, which while valuable definitely falls under the idea of “applied science”. Here, I want to focus on those agencies with the clearest pure-science missions, even if I certainly value human health.

END_OF_DOCUMENT_TOKEN_TO_BE_REPLACED

Tonight, President Trump will address the nation during prime time (9pm EST). Major networks will carry the speech. The Democratic leadership will rebut the speech afterward. The speech is expected to focus on the following claims from the President:

This is a brief guide to thinking critically about the claims of the President.

President Trump’s honesty when he makes claims has been assessed independently by a number of fact-checking organizations. Typical information gleaned from these analyses is as follows:

Things to watch out for:

The above are a few ways the President, or any skilled propagandist, will attempt to deceive you by short-circuiting your slower and more careful critical thinking mechanisms. Remember, the burden is on the President to justify that (1) there is a national security crisis, a physical threat to the U.S. due to unique circumstances at the southern border, (2) that the attempts by people to enter the U.S. illegally are the primary means of implementing this threat and (3) that the numbers of illegal immigrants, people who cross the border without the intent of seeking asylum or other legal means, can be stopped by spending $5.7 billion to construct about 200 miles of wall.

The Washington Post has already cataloged a cheat sheet to help you unwind the 20 mostly likely claims the President will make or repeat tonight:

Keep this resource handy if you choose to listen to what I believe will largely be a misleading propaganda speech intended to shore up support from his base, but otherwise attempt to mis-inform the general public (based on the data from his past behavior).

Here are links to the President’s speech and the rebuttal by Democratic leadership:

Here is the Washington Post Fact Checker’s evaluation of the president’s claims: claim evaluation from Jan. 9, 2019.