Every year, Jodi and I run a local Halloween-themed 5K race together. Recently, the race became a charity for an organization that tries to help children and their families deal with particular cancers. It’s nice that the race goes to support a good cause; to be honest, I don’t run it for the cause, but for the run itself. That said, for the past 2 years I have been fairly horrified by some of the “goodies” in the race bag that you get at registration.

END_OF_DOCUMENT_TOKEN_TO_BE_REPLACED 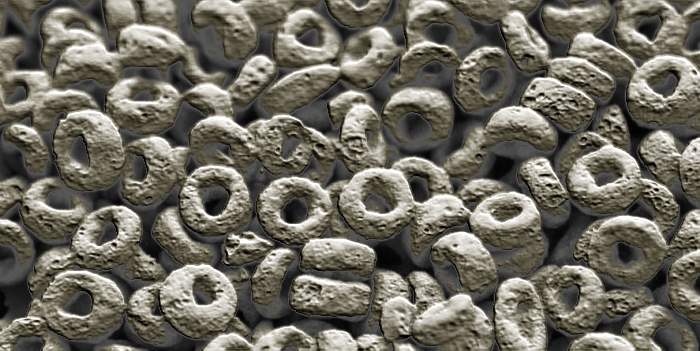 General Mills (in a blog post written by Tom Forsythe) announces that Cheerios, a flagship cereal for the company, will no longer be made with genetically modified ingredients [1].

What’s wrong with this announcement?

General Mills is adding labels to its food products, like Cheerios, that read “not made with genetically modified ingredients.” However, this is impossible – it’s scientifically inaccurate, and thus does a disservice to the natural world of which we are a part. So . . . are they making Cheerios from rocks now? No, I am not being snarky – I am merely attempting to identify something from which Cheerios can be crafted but that itself doesn’t contain DNA. That’s because all biological organisms are genetically modified . . . this is how natural selection, or “descent with modification,” works to create biological organisms adapted to their environment. Without it, life as we know it is not possible.

What General Mills actually means to say is that they will no longer use ingredients whose genes have been precision modified (e.g. “Biotechnology”) to make the organisms even better at resisting pests, or tolerating their environment, or increasing their yield. Precision genetic modifications are better tested and understood than those made in the wild, so this makes no scientific sense.

What’s right with this announcement?

When it comes to food policy and the science that informs it, one must separate the science issues (biotech foods are generally well-studied and well-controlled, with no known harmful side-effects for human consumption) from the values issues (people are afraid of eating new things, people make choices about what they eat based on philosophy, or politics, or religion, etc.). In fact, the General Mills blog posts stresses rightly that, “… it’s not about safety. Biotech seeds, also known as genetically modified seeds, have been approved by global food safety agencies and widely used by farmers in global food crops for almost 20 years.” They rightly distinguish the values and science issues in this policy.

So if they have the science right, what’s up with the change? The company claims they did this because it was easy – the ingredients in question were a small part of the manufacturing process and it was a minimal change for their manufacturing process – and “…because we think consumers may embrace it.” . Since the call for removal of Biotech ingredients from foods has been coming from a loud group of people who confuse science and values in the making of food policy, I have to speculate that General Mills did this not only because it cost them little or nothing to do, but because it would placate that population. It’s certainly a policy move, but not a science-based policy move.

General Mills is free to use whatever they want in their food products, so long as it is not in violation of food safety regulatory mechanisms. However, they should not mistake genetic modification for Biotech foods; the latter is a subset of the former. To claim on a label that you’re not going to make Cheerios from genetically modified food suggests each one will be hand-carved from rocks; rocks possess no DNA and cannot be genetically modified. As a scientist, I want scientific accuracy in discussions of food policy, and if you are going to label foods then do it accurately and do not confuse the core scientific issues. The blog post itself did a decent job of separating the science issue from the other issues; but the food label itself uses this misleading idea that one can EVER be free of genetically modified food. That is impossible.

I keep a special feed on Google News called “Nonsenseville” [1]. It’s an rss stream that results from a search for keywords that typically appear in pseudoscience articles. Normally, I scan the headlines to get a sense of how credulous is the science reporting on a topic. Today, I saw this headline from the Canadian Sun news company in my feed: “Sun News: Acupuncture, even done wrong, can help women taking breast cancer drugs: Study [finds]” [2] (the last word appears to have fallen off their site . . . I assume it was “finds”). This is nonsense of the highest order, and is a dangerous message to women desperate for relief from the awful side-effects of breast cancer treatment. The message is: even an extremely incompetent and dangerous quack can help you. This is grade-A nonsense of the highest order, and deserves to be critically assessed.

END_OF_DOCUMENT_TOKEN_TO_BE_REPLACED

In an interesting interview with Vincent Cassone, chair of the University of Kentuck Biology Department, we learn how it is he was appointed to the final expert review panel for the Pearson public school biology textbook. Cassone makes this call at the end of the interview for all scientists to work for the cause of good science in the public science classroom. All good scientists must work to counter the lies, and the legal and political machinations of the creationists. It is a powerful call.